Amy Klosterman presented The Evolution of Title IX at our September meeting at The Executive Inn. Amy is an attorney and consultant who worked for over a decade enforcing Title IX at the US Department of Education, Office of Civil Rights. This year she opened her own law practice specializing in school and workplace law. She conducts neutral independent investigations, policy and procedure reviews, and training for school staff, employers and attorneys regarding their legal obligation under discrimination laws.

Title IX legislation which passed in 1972 states that no one shall because of sex be denied the benefits of any educational program of activity that receives direct federal aid. The original regulatory text covered athletics, pregnant and parenting students, employment, single sex education, a general ban of different treatment, and retaliation. It wasn’t until the 1990’s that sexual harassment began to be recognized as a hostile environment for learning. Title IX focuses on sexual harassment not as a crime, but rather seeks systemic remedies that schools can address. Amy Center with other members

Current hot topics include interpretation of LGBTQ inclusion – does Title IX cover gender identity harassment, access to restroom facilities, and fairness in athletic competition with transgender participants? There’s also the question of whether women only STEM classes and programs are allowed under Title IX – is the law violated if there is not an equivalent class or program for men/boys?

Amy shared with the group that she is a beneficiary of Title IX, being part of the first generation of women who felt they could be whatever they wanted to be… though maybe not all at the same time!  She expressed her thanks to the generations of women that came before and paved the way for the expanded opportunities. 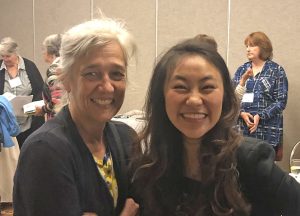